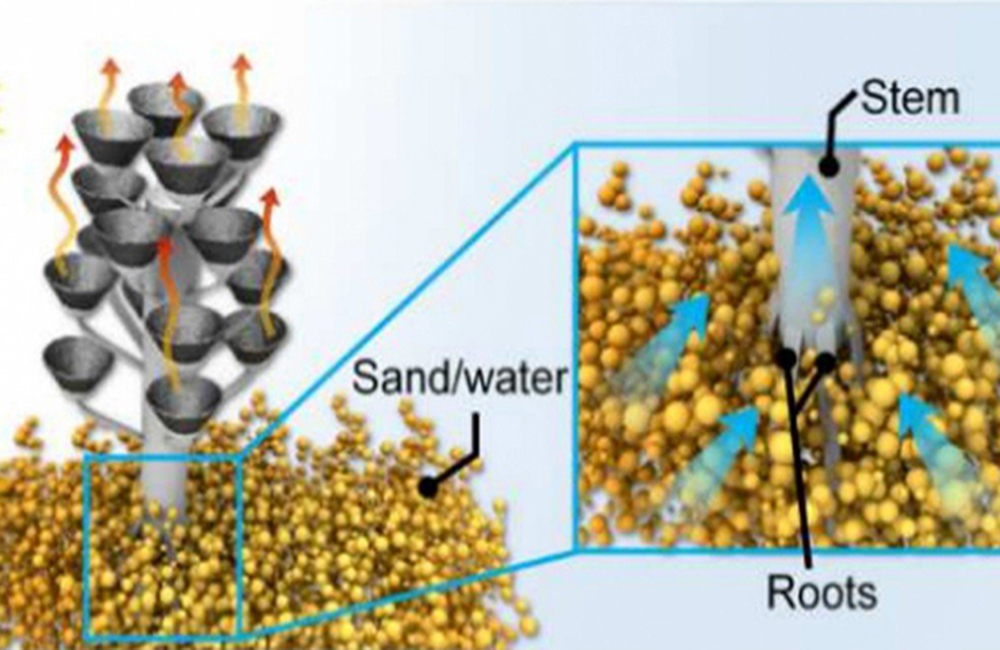 A Chinese-led international research team has created a “tree” that can generate clean drinking water.

Drawing its energy entirely from the sun just like a real tree, the “water tree” has a root made of cotton fabric that can absorb water from its surroundings, such as from sand on a beach.After water moves up the stem, it is vaporised by “leaves” made of black-carbon paper cones that convert light energy to heat, reaching nearly 50 degrees Celsius (122 Fahrenheit). The tree sits in a glass chamber with a relatively cool surface that collects the vapour.

Using standard cotton fabric and a new nanomaterial that can be cheaply mass-produced from charcoal, a paper cone with a surface area as large as 1 square metre would cost only US$2, according to the researchers.
A cone that size can generate up to 3.4kg (7.5lbs) of condensed water per hour, faster than any other solar-powered desalination methods previously reported.

Even on a cloudy day, the total output in seven hours of sunlight can reach 5.4kg, or three times the amount the typical adult needs to stay hydrated.
One tree can have multiple layers of branches, each with several cones to increase the vapour-producing surface area.

The study, published this month in the journal Nano Energy, was led by Professor Chen Tao at the Chinese Academy of Sciences’ Ningbo Institute of Material Technology and Engineering in Zhejiang province, and also involved researchers from Singapore and Taiwan.

One of the paper’s co-authors, Dr Ouyang Jianyong, associate professor at the National University of Singapore’s department of materials science and engineering, told the South China Morning Post that the technology could be applied in remote places such as on islands in the South China Sea.
“It is particularly useful for isles far away without a stable drinking water supply,” Ouyang said. “These ‘trees’ may not be able to quench the thirst of a large city, but they can meet the critical demand of a small community, especially in emergencies.

“We are already in contact with some companies [to commercialise the technology],” he added.

The material used to make the cone has several advantages, according to Ouyang. The cones can absorb a wide spectrum of sunlight, maximising the amount of energy they can collect, and their porous structure allows them to release vapour quickly.

When used to desalinate a supply of seawater, the trees would be self-cleaning at night, by water washing away salt residue without being vaporised as it would during sunlight hours.The vapour-producing fabric is as thin and lightweight as a few sheets of paper. It can be folded and sewn into almost any shape, or cleaned in a washing machine, and can operate effectively for several years in a harsh environment, the researchers say.
The condensed water meets stringent safety standards for direct drinking set by the World Health Organisation, according to the researchers.
· This article originally appeared in the South China Morning Post.