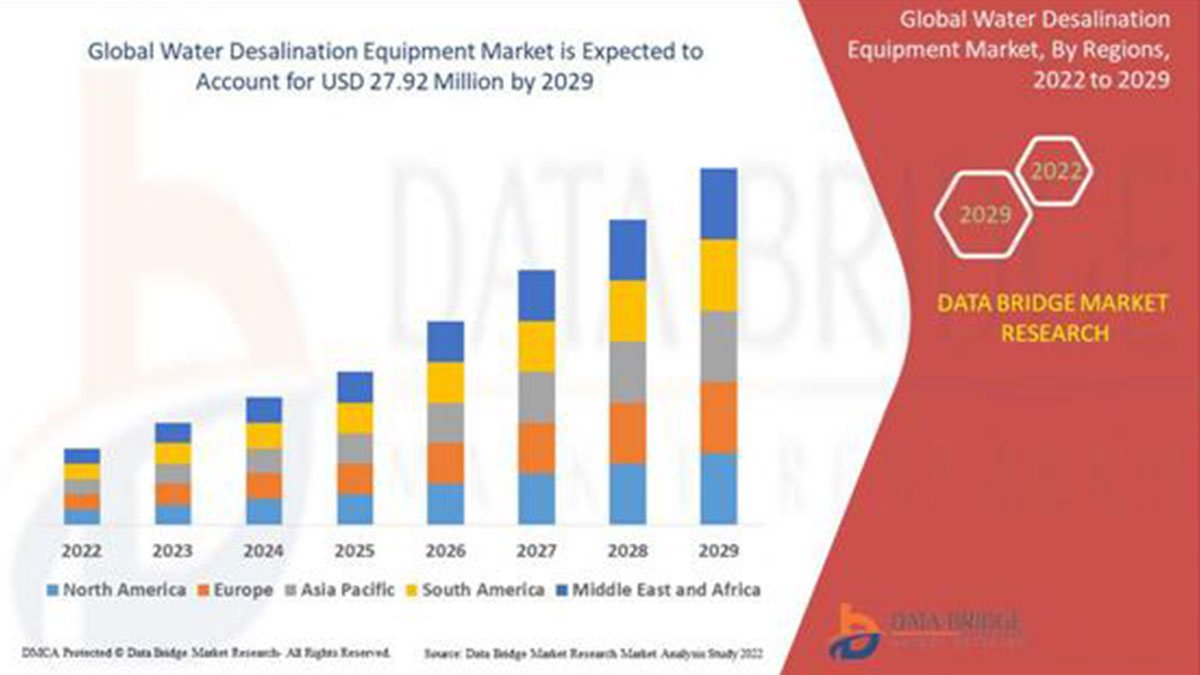 To prosper in the global market place, choosing a global market research report which includes market analysis based on regional and global level is imperative. An influential Water Desalination Equipment Market report puts a light on various factors that have direct or indirect effect on the growth of business which includes historic data, present market trends, environment, technological innovation, upcoming technologies and the technical progress in the Water Desalination Equipment industry. Additionally, a detailed analysis of factors influencing the investment is provided which forecasts forthcoming opportunities for the businesses and develops the strategies to enhance return on investment (ROI).

Shortage of water is the biggest problem overall the world and is only projected to grow bigger in the upcoming years. Water desalination is very important for resolving the shortage of water, so the industrialist use the water desalination process to purify the brackish water. Water desalination equipment are industrial devices which is used to purify brackish water seawater, or any other water. This technology helps to separate minerals and salts from different water sources such as wastewater, industrial feed, wells, and others, thereby converting them to fresh water or drinkable water. As a result, the equipment is extensively used in several industries including agriculture, oil & gas, mining, chemical, as well as in municipality settings.

Desalination equipment are used to separate salt from water to decrease the salinity of the discharge water. Desalination is a process which is used in water reuse applications at facilities that create high salinity water and produce brine as a by-product of other processes. Desalination equipment will be used during the treatment method of brine often from water intake in the ocean to eliminate the salts not only for human consumption and taste but also to ensure the durability of filters throughout the whole treatment process. This treated brine with minor salinity will then pass through advanced water treatment processes to make it for final stages to become consumption water.

Rapid industrialization has increased the demand of water resources globally. The expansion of industrial-based procedures requires a huge amount of water for manufacturing and other activities. Growing demand for water by manufacturing end users, such as paper and pulp, oil and gas, and food and beverage, is expected to drive the demand for water desalination plants further, increasing market growth.

The development in population and migration of people from rural to urban areas, depletion of freshwater sources and scarcity of consumable water overall the world have increased the requirement for desalinated water. This has stimulated the governments of developing markets to invest in the water treatment area to improve their capabilities related to providing drinkable water and accommodate the growing demand. These factors are expected to fuel the adoption of desalination equipment in the municipal sector.

Increase the demand for improving environmental issues
Deteriorating environmental factors, such as rising pollution, fluctuating weather patterns, and deforestation, have resulted in drought-like scenarios and all over the world. The governments of many countries are investing in desalination facilities to fight this situation, which is anticipated to drive the market growth of desalination equipment.

Rising awareness about reverse osmosis technology for handling all varieties of water feed with less consumption of energy is expected to increase the acceptance of desalination equipment through the emerging countries. The technology is popular in developing countries because of its simple operation and design. The demand for RO technology is likely to grow in the upcoming years due to its easy processing, low installation cost, ability to treat all types of feed water, and less use of chemicals.

In desalination plants to improve monitoring and manage operations, risk detection and process control, use digital technology which is expected to enhance the market growth. Technological advancements in the desalination industry aim to attain a variety of targets, including reducing disposal and disposal and improving freshwater yield.

The water desalination equipment market is segmented on the basis of products, usage, capacity, size, sealing and handle, shape, distribution channel and end-user. The growth amongst these segments will help you analyze meagre growth segments in the industries and provide the users with a valuable market overview and market insights to help them make strategic decisions for identifying core market applications.

The water desalination equipment market is analysed and market size insights and trends are provided by country, products, usage, capacity, size, sealing and handle, shape, distribution channel and end-user as referenced above.

During the projected period, Asia-Pacific is anticipated to be the fastest developing region due to increasing dependence on water desalination equipment in emerging markets such as India, china and Japan.